German practice Kadawittfeldarchitektur designed this kindergarten in Sighartstein near Salzburg, Austria, clad with metal elements designed to look like blades of grass.

The building houses a kindergarten on the ground floor with access to the gardens and floor-to-ceiling windows. A crèche is on the first floor, sheltered from bright sunlight by the external cladding. 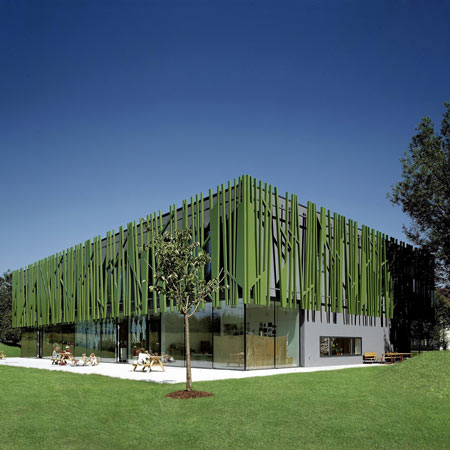 ADDED VALUE Genius Loci – the first impression of this place in the midst of green meadows and fields leads to the concept of the built playground. The elevated and abstractly stylized “grass” facade of the cubic building brings a certain harmony to the volume as well as an identity and orientation for the kindergarten.

The inner organization follows the logic of use: kindergarten groups have open access to the gardens while the crèche groups are kept safe in the floor above. The mid-point of the building is the multifunctional “interactions space” – a public communication area located at the intersection between functions. 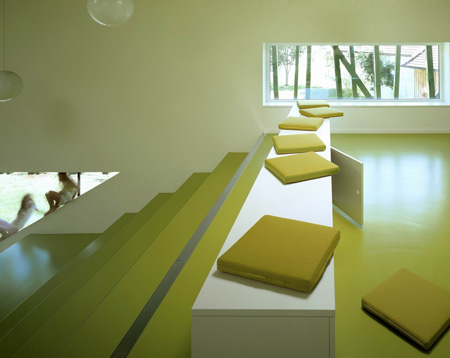 Spatial dimension of the ornamental facade

Situated on the periphery of the site of green meadows and fields, the first impression of the construction site provided the idea for the sculptural facade by way of an elevated grass turf. The oversized “grass blades” communicate the building’s unique identity and provides an orientation marker for the kindergarten. The stylized grass blades are not only ornamental, but also act as a continuation of the landscape theme – namely, the staccato row of spruces visible at the meadow’s edge or the branches of the neighboring leafy trees. The resulting scenic correspondence takes place not only in the building volume itself but also in the structure noticeable from within.

The space of the kindergarten, over the course of time, will be filled with colorful children’s things, furnishings, materials and first works. Thus, we consciously reduced the color spectrum to the single tone variation of ‘green grass.’ The multi-functional space unfolds itself in the building interior. Various shades of green take up the grass theme to define the individual areas. 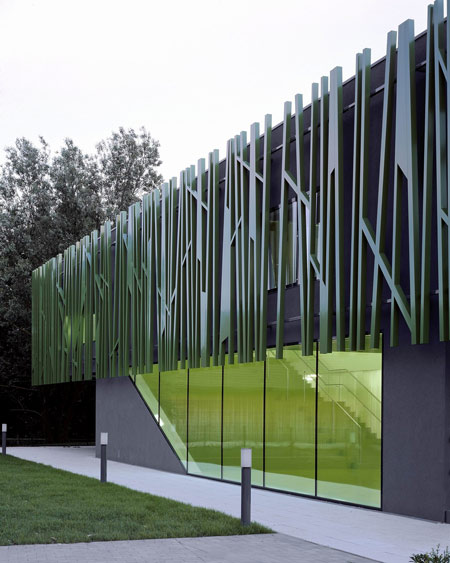 Photographs are by Angelo Kaunat.