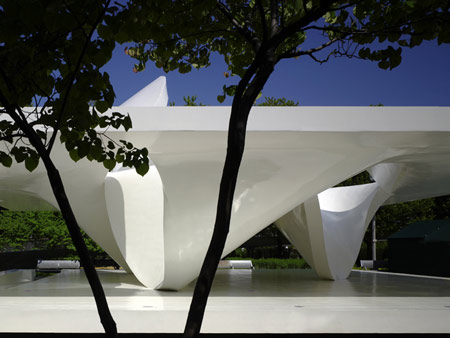 Recently the Dutch architects UNStudio completed the Burnham pavilion in Millennium Park, Chicago. The temorary pavilion opened last month and will remain in place until 31 October 2009, so be quick! The pavilion is build to celebrate the centenary of 1909 Plan of Chicago, also known as the Burnham Plan.

“The UNStudio Burnham Pavilion relates to diverse city contexts, program and scales. It invites people to gather, walk around and through and to explore and observe. The pavilion is sculptural, highly accessible and functions as an urban activator.” -Ben van Berkel

Some news from UNStudio:

UNStudio’s Burnham pavilion, commissioned for the centennial celebrations of the Plan of Chicago by Daniel H. Burnham and Edward H. Bennett, opened to the public on June 19th.

The pavilion, commissioned by the privately funded Burnham Plan Centennial Committee, draws ideas about opening Chicago’s rectangular grid from the Burnham Plan and offers windows onto Chicago skyline. Hidden beneath the sculptural form is a steel substructure made of material generously donated by ArcelorMittal.
The structure is designed to be deconstructed to maximize the recycling and re-use of the materials following the free exhibit’s closing later this year.(source unstudio.com) 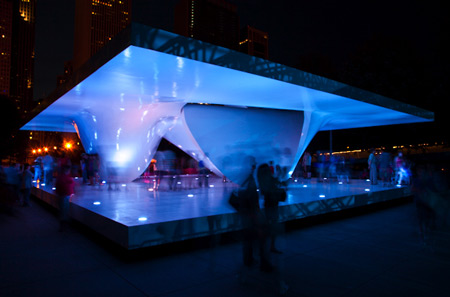