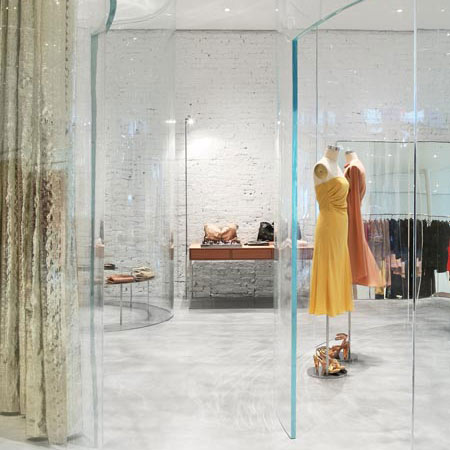 Japanese architects SANAA have completed the interior of a new store for the fashion designer Derek Lam in New York.

The interior space is divided by transparant, acrylic walls with metallic curtains. 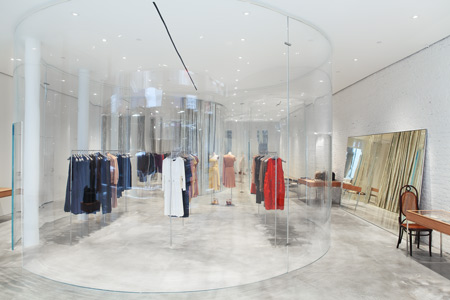 Here’s some information from the architect:

Derek Lam International, LLC will open its first stand-alone boutique April 2009 designed by internationally esteemed architects SANAA. “I am thrilled to work with architects who share my design philosophy and whose work I so greatly admire,” said Derek Lam, who counts Kazuyo Sejima among his very first customers. “SANAA has created a retail environment that is minimalist, functional, intimate and warm. The store concept will be an important step towards solidifying the identity of the brand.”

A year and a half after the opening of New York City’s iconic New Museum, the architects of SANAA have returned with a surprising second act, a stone’s throw from the Bowery, designing Derek Lam’s flagship boutique in Lower SoHo.The acclaimed Tokyo-based duo, Kazuyo Sejima and Ryue Nishizawa are currently working on projects around the world including an extension to the Louvre in Lens, France, museum projects in Oporto and Valencia and a university campus in Switzerland.

SANAA and award-winning designer Derek Lam met in 2005, and a year and a half ago began a collaboration to make a space that is marked by modern sensibilities, calculated simplicity and highly perfected detailing. SANAA’s strength has been its ability to understand and then exceed the client’s brief. Sejima and Nishizawa have created a transparent canvas of modulating acrylic curved walls for Lam’s refined and sensuous clothing.

Stripped back to the essential bones, custom fitted furniture of wood and aluminum, a one-pour concrete floor and the original brick walls painted white heighten the exhibition nature of the store. Transparent organic forms crafted of clear acrylic create rooms within the store, each one housing a different collection. Dramatic daylight from the large front façade windows facing east cast a shimmering aura as light bounces from one transparent bubble to the next.

The 2,800 square foot boutique, situated on the ground floor of a 19th century manufacturing building at 10-12 Crosby Street, will carry Lam’s ready-to-wear and accessories collections. The T-juncture of Crosby and Howard Streets in downtown New York is a rarefied and sophisticated shopping corner at the eastern edge of SoHo, just blocks from the SANAA-designed New Museum. Several of New York’s most unique and high-end luxury brands chose this quiet T- juncture and neighbors include jewelry designer Ted Muehling, antiques specialist De Vera, custom furniture store BDDW, and the Jil Sander boutique.

One thought on “Derek Lam store by SANAA, New York”