A white forest in a grey field. This university project is designed by JUNYA ISHIGAMI in the West of Tokyo. 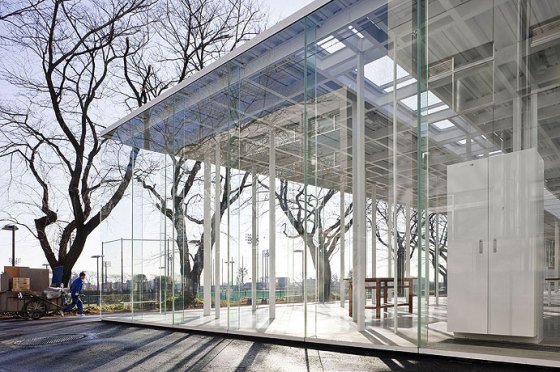 The young Japanese conjurer, who since 2004 has performed a series of astonishing acts of levitation upon furniture and building-sized volumes in galleries, has completed his first construction in the open air.

The Facility is a loosely programmed building at the Kanagawa Institute of Technology devoted to the general activity of  “making things”. In this space, students from a range of engineering and design disciplines collaborate with the local community to craft anything from furniture to robots.

The structure presents another round in the architect’s ongoing contest with gravity. The forest comprises 305 slender steel 5m-high columns, irregularly orientated and distributed throughout the space, while the field from which they rise is a distorted square bed of concrete, 47m by 46m, slightly raised above the surrounding bitumen. A flat roof caps the space with linear roof lights, and a frameless glass perimeter seals it. The architecture ends there; its animation then takes over with furniture, pot plants and people.

Ishigami explains the evolution of the design as a painstaking investigation of the relationships between the columns – a task for which he developed custom-made software. “I wanted to make a space with very ambiguous borderlines, which has a fluctuation between local spaces and the overall space, rather than a universal space like that of Mies,” says Ishigami. “This allows a new flexibility to emerge, revealing reality rather than shaping it.” words by Julian Worrall for iconeye 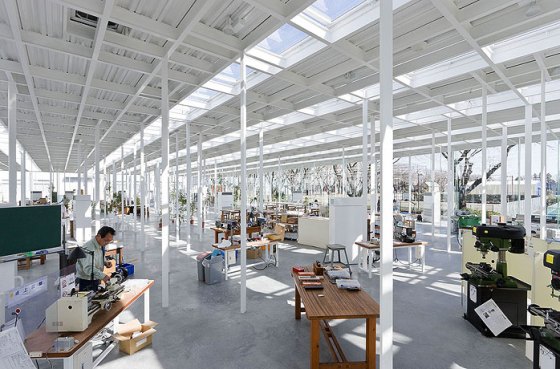 Via  Core.Form-ula
Images by Iwan Baan